Jacqueline Austin, a 2012 President's Doctoral Scholar, says her PhD has given her the perfect grounding as she takes on a new role as head of a major college in the Caribbean.

For me the central question was whether education and training were meeting the needs of our Caribbean societies. Were people being prepared for the demands of the 21st century workplace, and what exactly were these demands?

Ask Jacqueline Austin what benefit she gained from her studies in Manchester and expect an effusive reply.
"The impact on my career has been simply phenomenal, it has been absolutely amazing. The tremendous investment made by my supervisors, and the relationships I fostered during my years at Alliance MBS and the University of Manchester, I will treasure forever. My PhD taught me so much about leadership, and that really resonates with me today."

Austin is from Barbados and was working in career development at Barbados Community College when she was given the opportunity to apply for a Humphrey Fellowship Program which invites mid-career professionals from across the world to visit the US for a year of graduate level study and leadership development.
After successfully applying she spent a year at Penn State University in Pennsylvania, and upon returning to the Caribbean was keen to pursue further educational studies. "I was really keen to improve my skillset further and began exploring opportunities for sponsored PhD programmes across the Commonwealth. I was told that Manchester was an excellent place to try but, to be honest, never thought I would be successful. I was both thrilled and amazed when I got accepted."

Austin says what she discovered was that in Barbados there were conflicting perspectives about what policy action should be taken in order to address specific issues such as high youth unemployment.
"Just as in many other parts of the world, there is a skills mismatch among younger workers, and there are challenges in terms of promoting the benefits of technical and vocational education.
"The discourse on the role of education in the preparation of graduates for the labour market is highly contentious and unlikely to be resolved anytime soon. For instance some believe that years of schooling and test scores are a sufficient measure for skills.
"Arguably, the role of education extends beyond the workplace to society as a whole and may be seen as crucial to addressing challenges of inequality and social injustice. What I wanted to do was dispel some of the myths around this subject and show the impact of elevating the prestige and role of vocational education."

Her thesis made three key conclusions. Firstly that in Barbados the 'social partnership' between government, employers and unions was not achieving its goals and needed to speak in a more cohesive way.
Secondly, that in sectors such as banking and manufacturing there remained a strong emphasis on training but that there was still a high reliance on paper qualifications rather than competence-based training. The surplus of graduate labour creates an 'elevator effect' on recruitment strategies of employers who demand higher qualifications for jobs that do not necessarily warrant such qualifications.
And thirdly, that there was a need for a stronger focus on Technical and Vocational Education and Training (TVET) focused initiatives. However, the provision of education by the state from primary to tertiary level provides general skills which employers are able to adapt to firm specific purposes.

After completing her PhD Austin returned to Barbados and launched into consulting with various clients including the Caribbean Development Bank. However at the same time, the knowledge that she had built up of the education sector across the Caribbean had become noted in high circles, and earlier this year she was offered the role of President of the Clarence Fitzroy Bryant College on the nearby island of St Kitts, a college home to 1,000 students taking a range of academic and technical and vocational subjects.
"It's an ideal role for me, and I'm really attracted to it because of the opportunity to influence policies and processes for student development at the grass root level," she adds. "For me the most important goal is access. Giving citizens of the Federation of St. Kitts and Nevis the opportunity to pursue their dreams, to give opportunities to lifelong learners, and to prepare them to become global citizens. Students are not just here to gain academic knowledge, but to also become citizens who have the requisite skills, talent and ability to transform this region and beyond.
"For me personally, taking up this role also affords me the opportunity to make that crucial link between policy and practice, which is exactly what I was prepared for by the University of Manchester." 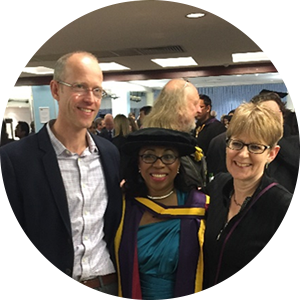 Jacqueline was awarded the prestigious University of Manchester President's Doctoral Scholarship in 2012, a highly competitive scholarship and a reflection of the intellectual rigour, commitment and ability that Jacqueline brings to everything she takes on.

From my first contact with Jacqueline I was struck by her deep interest and commitment to education. Jacqueline's new role is a perfect opportunity for her to combine her excellent thesis - exploring the development of skills and training strategies across the globe and within the Caribbean - and her desire to give students the best possible opportunity to develop themselves.

Jacqueline was an excellent student, and just as importantly, a considerate colleague. She has a positive attitude, a motivating approach to education and a desire to make a difference. We send our hearty congratulations to Jacqueline and wish the College all the very best in its future endeavours."