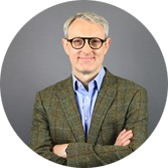 Andrew Buckley, Executive Vice President for MasterCard’s Vocalink, recalls his time studying for his MBA and, more recently, a DBA.

Andrew Buckley's (MBA 1993, DBA 2018) current role includes responsibility for non-traditional products at MasterCard, including products that the firm recently took on as part of its acquisition of Vocalink. Vocalink designs, builds and operates bank account-based payment systems, and as well as having a major presence in the UK also has business operations in the US, Sweden, Singapore and Thailand. It also plans to roll out similar services in the Nordics, Philippines, Peru and other locations.

Buckley joined MasterCard five years ago and during his time with the company has held product roles across both London and New York offices. “My recent background has been in card payments, so I chose this role as it was an area of the business that I hadn’t learnt much about before.”

Buckley originally studied for his full-time MBA in the early 90s. As he adds: “After completing my first degree in electronic engineering I was working in a technology role and felt that an MBA would help me transition to marketing and product management. I looked at the option of studying an MBA in the US or Europe, but after doing my research into Manchester I really liked the idea of the Manchester Method and found the idea of the group and team work amazing. I was also keen on the idea of doing an international exchange which I got to do in North Carolina, giving me the chance to learn and gain insights into business within a southern state in America.”

For anyone considering an MBA, Buckley says it gives you a framework and set of tools that you can use throughout your career. “I am still using the skills of the MBA today, especially when I moved to different areas of MasterCard and was able to fall back on some of the approaches that I had learnt on the MBA.”

With this in mind, he says that anyone considering an MBA really needs to commit to their decision and truly embrace it. “You can’t be half-hearted about studying for an MBA because you won’t get as much out of studying the programme as those who really revel in the experience.”

In recent years Buckley has returned to Alliance MBS to take a part-time DBA which has enabled him to continue with his working life while also returning to the academic world and applying research to business.

“Doing the DBA gives you the opportunity to look outside of your organisation and critically reflect on the business and working life. This helps me with my day-to-day job at MasterCard, enabling me to have different insights into the various business challenges I might face.”

The research topic that Buckley has focused on for his DBA is innovation in services. In particular he is interested in the gap in the literature that assumes that most service companies are the same, and his research has identified a new segment of the services market."

The DBA asks you to reflect on some of the assumptions and experiences you have had and the academic process teaches you to look at all the different research and frameworks from the literature. These elements combined have given me an alternative insight into my day-to-day role which I think makes me a more effective manager, particularly with the fintech industry going through a lot of change.”