A year into the pandemic, Guillermo Pereira, Jonatan Pinkse and Frank Geels ask what the UK has achieved in terms of its much heralded green recovery.

It is essential that our recovery from Covid-19 is a sustainable one that is beneficial for the UK’s productivity, competitiveness and environment. Indeed, our intentions in the immediate aftermath of the pandemic were certainly positive with billions of pounds committed to energy retrofits in buildings as well as support for electric vehicles and the hydrogen industry.

But our research has shown that compared to France and Germany the UK green recovery could have been more ambitious, less bumpy, and more clearly delivered.

In contrast the UK government committed fewer resources to green action and failed to present an integrated recovery package (see below). Instead it introduced recovery measures in its ‘Plan for Jobs’ in July 2020, and in ‘The Ten Point Plan for a Green Industrial Revolution’ in November 2020, together amounting to €17.3bn.

Dedicating the largest share to hydrogen and electric vehicles, Germany has used the green recovery to make headway into delivering new technologies in the hope of becoming world leaders in a net-zero economy and accelerating the development of sectors with long-term economic and green potential.

For instance hydrogen can reduce emissions in industries which are hard to decarbonise such as steel and chemicals, which remain important sectors of the German economy. Electric vehicles will form the cornerstone of a greener German auto industry.

Focusing their green recovery on building energy retrofits and railway infrastructure, France and the UK aim to deliver short-term economic and environmental benefits. Both were harder hit by the pandemic than Germany so investing in these sectors makes sense because it sustains jobs. Labour-intensive renovation measures and modernising the railway infrastructure both have the potential to create many jobs in the construction sector, for example. 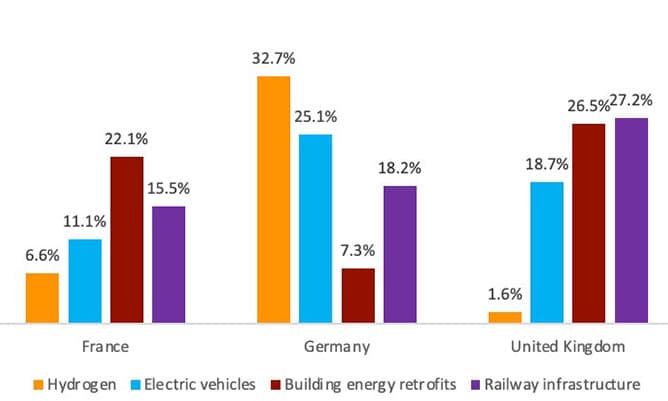 However such plans have no value without proper implementation, and in this context the UK has experienced a bumpy delivery.

If we just look at building energy retrofits, the government aimed to deliver significant energy efficiency improvements. Initially the Green Homes Grant was introduced, and then later its budget was further increased and the timeline extended to ease implementation.

Then in early 2021, after significant administrative problems, most of the budget was scrapped with the government claiming the policy was meant to be a short-term stimulus. In less than a year, the UK went from being very committed to its building stock renovation to almost no commitment at all. This indecisiveness is bad for jobs, the economy, and the environment.

What explains the complications? One reason was the UK’s choice to create an entirely new programme. By contrast Germany channelled its buildings energy retrofit recovery budget to a well-established programme that had been running since 2006. In France, a mixed approach was followed with funding going to both new and existing programmes, possibly to hedge against implementation challenges.

The UK’s problems clearly show the importance of designing policies that include an ambitious strategy with the necessary implementation mechanisms for effective delivery.

Comparing the three countries’ green recovery plans, Germany’s focus on new technologies is promising and can deliver long-term green growth, but it will require significant market development efforts and technology uptake, and remains a risky bet.

The French and UK’s focus on existing sectors can deliver short-term economic and environmental benefits, but only if plans are properly implemented. Moreover, this safer bet will be less transformative in accelerating sustainability transitions and boosting economic productivity.

How each country decided to balance the options has been shaped by their pre-pandemic trajectory on climate and economic progress, and priorities for the future. Germany’s support for sectors with a long-term productivity potential shows a greater focus on gaining competitive advantage in new sectors and was enabled by an economy that was more resilient to the short-term economic shock.

The French and UK focus on short-term gains is more clearly driven by political motivations. France has presidential elections in 2022, while the UK needs to show quick gains and position the country as a leader in the delivery of green progress post-Brexit and ahead of COP26 in November.

What is needed now

As we have seen, implementation challenges can quickly and significantly derail green recovery plans. The UK would benefit from a clearer post-pandemic strategy that connects and expands the actions proposed so far. For instance although there is significant attention for hydrogen, the UK does not yet have a national hydrogen strategy, unlike Germany and France.

The UK needs policies that not only have the ambition to accomplish a green recovery but which can also be implemented with relative ease. While a short-term impetus was needed, the UK’s green recovery should have longer-term follow-up plans and more clarity about how and when the money will be spent.
Looking ahead, the UK would benefit from less drastic changes in its policy proposals to provide more certainty to the public on what it wants to achieve and how it wants to get there.

The project focused on the scale, scope, and implementation of Covid-19 green recoveries in the UK, Germany and France, and was funded by The Productivity Institute (Economic and Social Research Council grant ES/V002740/1).

Guillermo Ivan Pereira, Frank Geels, and Jonatan Pinkse are from the Manchester Institute of Innovation Research.