A new report from Whitecap Consulting, supported by Alliance Manchester Business School, has found Greater Manchester is home to a thriving and growing FinTech sector, which (outside London) is the largest regional FinTech ecosystem in England.

The report, based on research completed before the Coronavirus outbreak, is the first formal published analysis of the FinTech ecosystem of the Greater Manchester region. It was supported and co-funded by a number of organisations including Alliance Business School, BJSS, CMS, FinTech North, Innovate Finance, MIDAS, and The University of Manchester.

The new report has identified and researched 39 FinTech startups and scaleups that are within the Greater Manchester ecosystem, which is the largest number of all the regional FinTech ecosystems assessed by Whitecap Consulting to date.

49% of these firms are scaleups, which is also the highest proportion identified in any region. The report also finds 109 firms active in FinTech in the region, including established financial organisations, tech firms, as well as the FinTech startups and scaleups.

Almost 8,000 people are estimated to have FinTech related roles, more than any other region researched by Whitecap to date. Additionally, the report highlights a wide range of other organisations that support FinTech, including the public and private sectors, and higher education institutions.

“We are pleased to present our initial assessment of the Greater Manchester FinTech Ecosystem, the fourth regional FinTech ecosystem report that we have published in recent months. This report paints a positive picture of a region with strong financial and digital sectors, as well as a higher volume of FinTech startups and scaleups than any other region outside London that we have researched to date. These firms are supported by an ever-growing number of co-working spaces which are facilitating connection and collaboration between startups, scaleups, established organisations and other stakeholders. FinTech provides a material economic growth opportunity for the UK, the North, and for the Greater Manchester region.”

“Being home to the UK’s largest regional banking and financial services industry, as well as one of Europe’s largest digital and technology clusters, Greater Manchester has developed a strong reputation as the FinTech capital of the North; and on behalf of Greater Manchester, MIDAS is delighted to support this pioneering research into the city region’s FinTech industry. Thank you to Whitecap Consulting for leading on this important piece of research, which demonstrates there is huge growth potential for the FinTech industry in Greater Manchester and across the UK.”

“Mapping the entire FinTech ecosystem is an important exercise in order to get a better understanding of the variety and size of the FinTech sector in and around Manchester and to identify the needs and potential for further growth and investment. Being part of the city’s vibrant innovation and R&D cluster, we are aiming to establish Alliance Manchester Business School and The University of Manchester as a FinTech research and teaching powerhouse internationally.”

The higher education sector in the region has an active involvement in the FinTech sector in the region, spanning academic courses, business engagement and research. Greensill, a leading British FinTech company founded by Lex Greensill, an Alliance Manchester Business School MBA alumnus, recently provided £2.5m to support The University of Manchester’s understanding and sharing of FinTech expertise across business communities locally, nationally and globally.

Other regions which have been researched by Whitecap include: North East, Bristol & Bath, Leeds City Region, and the West Midlands. 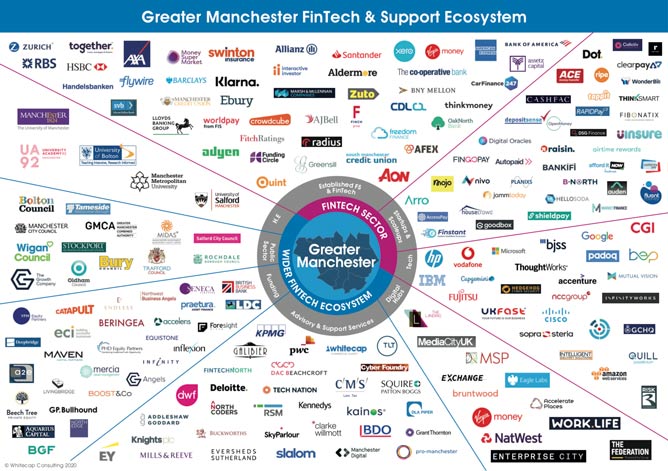