Infrastructure investment opportunity to get Northern Powerhouse back on track

A period of “transformative investment” in the North could finally give the Northern Powerhouse the opportunity to fulfil its purpose, according to a new report.

The report, by academics from Alliance Manchester Business School and sponsored by Barclays*, highlights that a core weakness in the North is the lack of investment in transformative infrastructure, which has the potential to improve the region’s economic growth.

The region’s leaders should leverage the growing cross-party consensus around the importance of investing in transformative infrastructure, particularly with a general election expected in the near future.

Meanwhile, the resources released by the potential HS2 delay could be turned to constructing HS2 Phase Two from both ends simultaneously. In combination with complementary investment in Northern Powerhouse Rail, this could ensure more efficient delivery and acceleration of progress in the North.

The Treasury’s methodology for allocating investment, which ‘follows’ economic growth rather than seeking to stimulate it, also disadvantages the North, the authors believe. A report by think tank IPPR North last month claimed that the region was set to receive £2,389 less per person on transport spending than London. Current methodology means that faster-growing and more wealthy regions will always be favoured. The experts argue that regional disparities will be reinforced unless appropriate strategic decisions are made.

Graham Winch, lead author of the report and Professor of Project Management at AMBS, said: “We lack the tools we need to drive transformative change here in the North and the national decision-making process for allocating resources in this area isn’t yet fit for purpose. We know that transformative infrastructure projects enable higher growth, and that the higher the rate of growth, the shorter the pay-back period for any given investment. With the tools at our disposal to stimulate growth, we’d be able to quell ongoing economic disparities.

“There is now considerable cross-party support for infrastructure development in the North, and so we need to grasp this opportunity to take the economic growth of the region to a new level through investment in transformative infrastructure.”

Greater efficiencies in the organisation of project delivery could guarantee stronger infrastructure delivery. According to the study, current inefficiencies are being caused by a lack of engagement with the supply-side by public sector infrastructure owners and operators who are unable to govern their projects effectively as a consequence. Proactive commercial engagement with suppliers and strong governance of investment programmes would create a more collaborative owner-supplier relationship, they argue.

The experts also point out that overcoming additional challenges associated with delivery, such as the need to develop a Northern skill base for delivery on site and a cadre of senior project managers and directors, would propel the region forward. Capable owners, effectively led, will then have the confidence to engage collaboratively with their suppliers.

Winch added: “An over-reliance on the supply side, coupled with the fact that the North struggles to attract sufficient on-site labour and management teams from outside of the region, mean that delivering the same scale of infrastructure projects as other parts of the country is challenging. The North needs to develop its own infrastructure delivery skill base, otherwise the growth ambitions set out by the Northern Powerhouse will be compromised.”

Identifying an ownership model for Northern Powerhouse Rail that has the capability to shape and deliver projects effectively and engages both regional and national stakeholders will realise the North’s potential. Focusing on opportunities involving private sector investment such as the Manchester Airport HS2 Interchange, Northern Powerhouse Rail, and HS2 Phase Two, rather than putting forward a generalised “ask” of central government, will help to ensure economic benefits are enjoyed in the region.

Henri Murison, Director of the Northern Powerhouse Partnership, said: “The Northern Powerhouse is of critical importance to the future prosperity of the UK, and leading academics at the Alliance Manchester Business School, supported by Barclays, make a strong case for the benefits of transforming connectivity to make a much more significant impact. Without this, it will be impossible to secure a virtual city spanning the North and a more linked economy which can achieve the same advantages available to a city the scale of London including its wider South East labour market.

“The case for reform of the current way in which schemes are evaluated by government is compelling, because many of the benefits which will be delivered by schemes such Northern Powerhouse Rail, HS2 and the wider projects they unlock to rebalance the economy are not fully realised at assessment stages. For the Northern Powerhouse to be successful, there is a clear case to revise the methodology used by the government currently.”

(*) Barclays supports the Northern Powerhouse initiative, however the report may contain views that do not represent Barclays’ own. 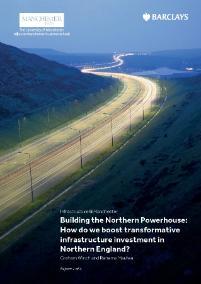 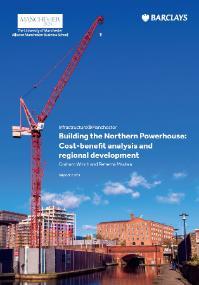 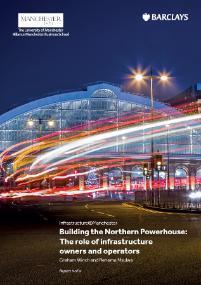 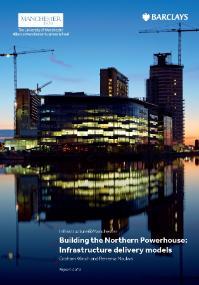