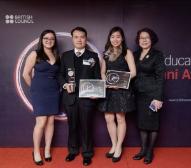 Held across ten countries, the Education UK alumni awards celebrate the benefits of studying at UK universities. Our alumni beat more than 800 high quality applicants representing 110 institutes to reach the finals, demonstrating ‘outstanding achievements which have made a meaningful professional impact upon their communities and countries’.

In February 2015 Kelvin launched Korean Corner, an importer and distributor of premium Korean goods such as children’s products and toys, outdoor items and homewares. Kelvin also created the brand ‘paper world’ – a unique range of environmentally-friendly items that are made from 100% paper and meet the highest safety standards. ‘paper world’ has partnered with companies such as H&M, LINE, Hayao Miyazaki and Junior Chamber International (JCI) at a wide range of events.

Korean Corner opened its first conceptual ‘paper world’ store in Taipei in February 2015, closely followed by a flagship showroom in Hong Kong in March 2015 – home to Asia’s tallest paper dinosaur slide! The company has since expanded to Korea and Australia, with new territories such as the USA on the horizon, and it regularly supports voluntary community initiatives, such as the Charles K Kao Foundation for Alzheimer’s disease and HSBC Playright PlayScope.

Kelvin is also Chairman of the Drafting Committee of the ‘Concern Group of Hong Kong Youth Entrepreneur Policy’, which aims to assist youth entrepreneurs and other start-up businesses.

The Entrepreneurship Award is the latest in a growing list of achievements for Kelvin, who won the Hong Kong ‘Young Entrepreneurial Award of Excellence’ and ‘The Most Creative Award’ in November 2015.

Charlotte Ho is an alumna of the Global MBA programme. In her current role as a Vice President at Bank of America Merrill Lynch, Charlotte helps to ensure that the audit practices of one of the world’s biggest banks meet regulatory requirements across Asia Pacific. Prior to this, Charlotte was a Director in Legal and Compliance at UBS and has held other roles at global financial institutions including Citi, HSBC and JP Morgan.

Charlotte was awarded the 2015 Young Business Leader Award by CPA Australia, one of the world’s leading accounting bodies, and values her MBA as a significant factor in her success to date.

Christina Siu, Regional Director, East Asia Centre comments: “We are extremely proud of Kelvin and Charlotte and it is great to witness the achievements our alumni community in East Asia and further afield. The Education UK awards are extremely competitive so it is a fantastic achievement to reach the finals, let alone win. We wish both finalists every success in the future.”

Find out more about the Global Part-time MBA >>