From the house that tweets to bringing dinosaurs to life, Andy Stanford-Clark, IBM Distinguished Engineer and CTO of IBM UK is a master inventor with experience of innovating in both his personal and professional life. 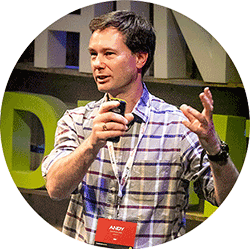 A self-confessed electronics hobbyist, specialising in technologies which help to make the planet smarter, Andy is a software engineer with a difference. As a TEDx speaker and with appearances on the BBC, Andy is well versed in sharing his amazing career highlights and what life is like at IBM – an environment in which it’s OK to innovate.

If you want to hear about how to rapidly innovate technology products in the areas of IoT, AI and Quantum Computing then this event is for you.

Register now to hear about Andy’s exciting IoT projects and how he’s using automation to solve the world’s problems.