Tips on how to live with flatmates

Having lived at home during my undergraduate studies, the idea of living with people I had never met terrified me. Different people have different personalities and different styles, some are cleaner than the others whilst others are noisy than others and depending on the personalities of the people whom you end up living with, sometimes it can prove to be a challenge.

Five months into living with my flatmates however, I can happily say that my fears have been put to rest. I guess I was lucky in away as I ended up with flatmates whose personalities are more similar to mine, so it didn’t take us long to become familiar with each other. It might be that maybe for you the familiarity does not happen that fast and whether you end up becoming friends with your flatmates or not, there are some steps that you can still take to make the whole experience easier not just for yourself but also for your flatmates:

1. Be Open Minded Towards Those You Live With

The reason why I said keep an open mind is because you are likely to live with people from a different background to yours, your culture, lifestyle, and belief might be completely different, so be open minded enough to want to learn about one another and also respect other people’s cultures and perspectives. If you happen to live with people with varying cultural backgrounds, things such as taking turn to cook cultural food is always a good idea.

Communication is probably the most important aspect of living with others. With everyone being different, they are bound to be something that you do not agree on even if your personalities are similar. It is important that you communicate things that make you feel uncomfortable. If your flatmate perhaps plays her music a little bit too loud or comes hope at 3am and bangs the door really hard or maybe she leaves dirty dishes in the sink and it bothers you, don’t be afraid to nicely let them know because if they don’t know that whatever they are doing is bothering you, then they cannot change it.

3. Be Mindful When Inviting People Over

Although at the moment we are not allowed to mix with other households, hopefully by the time you start Uni it will be over and you will be able to bring people over but keep in mind that your flat is shared and whilst you have the right to invite your friends over, it might be nice to mention it to your flatmates as this would allow them to maybe go to the library if they need a more quiet place to study and also help them to avoid the awkwardness of meeting strangers in the corridor. I am sure it would not be nice for either you or your flatmate to bump into a stranger in your kitchen.

4. Invite Your Flatmates to Do Things with You:

Doing activities together will give you and your flatmates an opportunity to get to know one another and create a long-lasting relationship. It could be going for a walk and exploring the city together or having a movie night. One of the things that my flatmates and I do very often is having dinner together on most nights and talking about how our day has been and going for a walk around the city.

Meeting and living with new people can be scary at first but as you get to know they people whom you live with, it gets less scary and often you end up becoming friends with those people. Do not forget that they are probably as terrified as you. 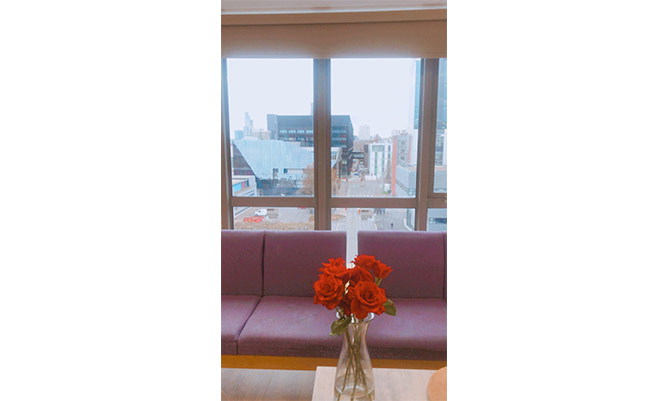 I am Emerance Mutesi, follow my blogs for an insight into life as a Master's student at Alliance MBS.