Every year the Manchester University Chinese Student Society hosts a nationwide Hong Kong football tournament in Nottingham where Hong Kong societies from various universities across the UK come together and battle it out in the football pitch.

I participated in this annual event during my first year but we unfortunately failed to make it out of the group stage that year. However, given that this year our team was filled with new blood and everyone was extremely enthusiastic about the sport, I was confident that we would make it quite far in the tournament.

The day started off early in the morning with my friend, who very kindly offered to drive me to Nottingham. Unlike my first year, the weather was fantastic, and the sky was clear, which was perfect for the occasion. By the time I arrived, everyone was already there and we started to warm up and get ready for the game. As imagined, the pitches were packed with players from different universities, some teams even had a whole cheerleading squad with them!

Our first match was against Cardiff University. As mentioned during the team briefing, we started off pressing as much as possible to take advantage of the fact that teams probably weren’t fully warmed up yet. As we expected, this tactic was very effective and our opponents seemed to be caught off guard. Not long after kickoff, I assisted one of my teammates through a corner kick which he headed in for the first goal. Even though we were ahead, our team captain reminded us not to slack off as the game wasn’t over yet and it could go either way. Through constantly pressing the ball and playing proactively, we managed to score another goal and seal the deal.

It was extremely exciting to finally win our first game and it definitely helped bring up our team morale and made us confident that we could take it all the way. Our second match was against Warwick University. Perhaps we were still overwhelmed over our first victory but we played poorly defensively and accidentally gave up a free kick to the opposition who then managed to score the first goal. Overconfidence got in our way and we ended up giving away an easy goal to the opposition. We quickly realised we should treat every game as seriously as the first and be sure not underestimate our opponents. Thankfully at the very last minute in that encounter, I managed to score a goal which earned us a draw.

Given the points difference, we managed to go through to the finals in which we played UCL. As expected, they were full of quality both in attack and defence and it took every last bit of us just to make sure the ball didn’t get close to the net. Our tiredness was also starting to get the better of us by this point, with multiple players getting cramps throughout the game, me included. Eventually, we managed to draw the game. To decide the champion, we had to take penalties. Due to my injury, I couldn’t take one for my team but it was just as nerve-racking watching my teammates take them as if I was the one who was in charge. We managed to clinch it at the end with our keeper saving a crucial penalty. Finally, after 3 years of hard work, we were the champions of the Nottingham Games Football Competition! 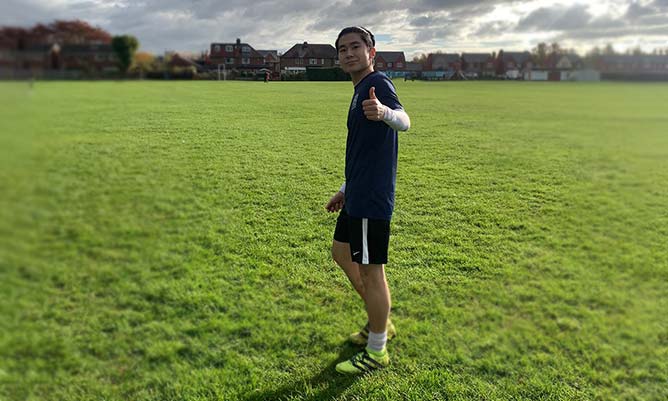 I am Adam, follow my blogs for an insight into life as an Undergraduate student at Alliance MBS.