A visit to Deansgate

After one semester and a half of wait, I have finally moved to Manchester. The successful vaccine roll-out and the decreasing number of new COVID-19 cases are bringing life back to the city. Hence why, I decided to take a small break from working on my assessments and visit one of Manchester’s most popular area, the Deansgate-Castlefield district.

In case you didn’t know, Deansgate is the name of the road that connects two of the city’s historical locations, the Deansgate railway station and the ‘Manchester Cathedral’. Once I got off the tram at the Deansgate-Castlefield stop, my attention was caught by an enormous skyscraper that had the shape of the letter ‘P’. After some research Googling on the spot, I have found out that it is a 158 m tall 47-storey mixed-used building named ‘Beetham Tower’, one of the world’s slimmest skyscrapers. Its bottom half is occupied by the four-star hotel Hilton Manchester Deansgate, whereas the top half is occupied by offices and residential apartments.

From 2006, the year of its construction, the ‘Beetham Tower’ had been the tallest building in the UK outside London. In 2018, it was surpassed by the 201 m tall ‘South Tower’ and its 64 floors. Interestingly so, the ‘South Tower’ is also located in Manchester and it is just across the street from the ‘Beetham Tower’. The ‘South Tower’ is part of, along with three other residential skyscrapers named ‘East Tower’, ‘North Tower’, and ‘West Tower’, a stunning urban complex named Deansgate Square. Although it is not officially regarded as one, the ‘South Tower’ has the features of a 5-star hotel, offering more than 400 luxury apartments furnished with modern design and technologies. Also located in Deansgate Square and close to the ‘South Tower’ is ‘The Club’, a unique health and wellness facility that offers a two-floor gym, a sports hall, a yoga studio, a spa, and a 20m long swimming pool. The exterior design is something that I have never seen before, black, white, and grey squares that resemble the theme of a chessboard. 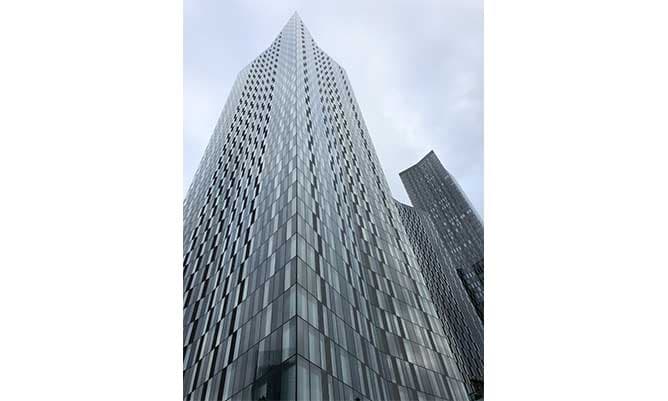 In between the ‘Beetham Tower’ and Deansgate Square and below the Deansgate railway station is located the Castlefield Canal Basin, a fort built by the Romans that has now become a conservation area. Castlefield and its ‘Bridgewater Canal’ played a substantial role during the Industrial Revolution of the 19th century, allowing shipments of coal and other raw materials to easily reach the manufacturing facilities located in the inner areas of Manchester. One thing that you would notice for sure if you ever have get the chance to visit the place is how similar the Castlefield area looks to the city of Amsterdam. The canals, the steamboats ‘parked’ on the side, the numerous bridges crossing from one side to the other, and the overall stunning green areas of the place resemble the vibes offered by the Dutch city. 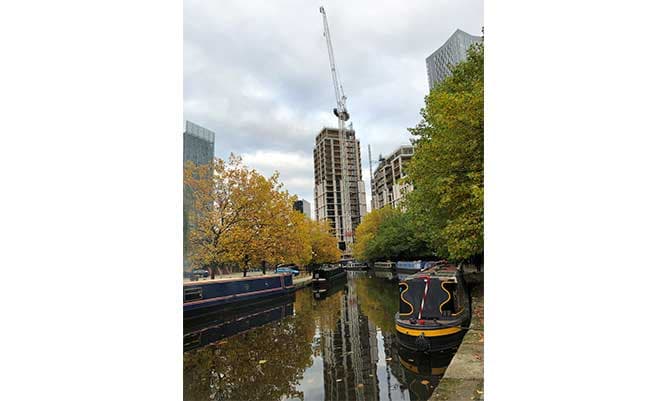 Although I had just a small glimpse of the area, I can’t wait to finish my assessments and have a chance to re-visit the Deansgate district. Historical parks, pubs, and restaurants, pubs, are waiting for me.

I am Gigin Pulickathara Joseph, follow my blogs for an insight into life as a Master's student at Alliance MBS.